A tree is an abstract idea, a common kind of structure which we find across many different applications. A tree models a relation between pairs of things:

Each of these examples has “nodes” and “links”, but they are not trees; we call them graphs or networks.﻿(1)

These example all define graph structures, but not tree structures:

Notice that the same “nodes” can have different “links” depending on which relation we’re interested in. For example, if the “nodes” are people, then the friendship graph will be different to the co-authorship graph.﻿(5)

Let’s see some examples; a node/link diagram is almost always the best way to visualise a graph structure, though there are other ways to represent graphs in text form and in computer programs.

This graph diagram shows the roads linking some towns and cities around Birmingham: 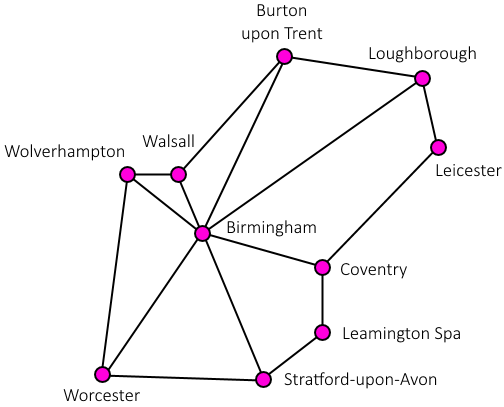 The purpose of this diagram is to show which towns and cities are connected by roads — the links represent the roads, but don’t accurately show their shape the same way a map would, since that information is not part of the graph.

This example shows some of the dependencies for the nano text editor: 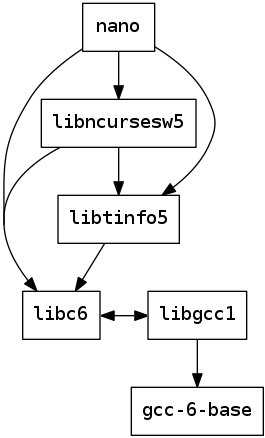 To install nano, all of these packages must be installed; but from the graph we can also determine which packages are necessary to install libtinfo5, for example.

The next example shows connections between audio sources and effects processors in a web audio application: 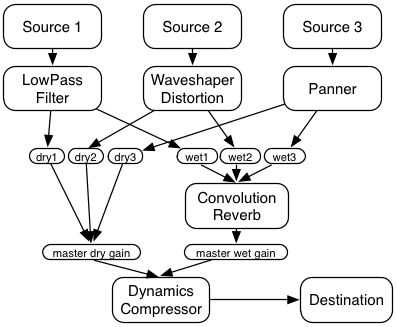 The nodes represent audio sources, processors, and destinations; the links show which outputs should be routed to which inputs.

Examples are a good way to get intuition, but we should also define specifically what a graph is:

There are some further rules we might add for graphs in some contexts:

It’s important to be aware of these differences, since they affect which data structures and algorithms we use to represent graphs and solve problems on them.

You can check this by writing down which pairs of nodes are connected by an edge in each diagram, then checking that both diagrams have the same edges.

The word “graph” is also used to mean the graph of a function, or charts such as bar charts or pie charts. None of these are graphs for our purposes.