Six Ways to Think About Trees

Trees in computing are an abstract idea with many diverse applications. Visual representations are especially important here, because a lot of ideas about trees are easiest to convey visually. Having more ways to think about trees also makes us more likely to recognise where they’re applicable.

So, in this post we’ll see six different ways to think about and visualise trees:

Much like in the parable of the blind men and the elephant, these are all different views of the same concept, and there is no single “correct” or “best” one. As we go along, we’ll try to show how they really do all represent the same concept of a tree structure, and we’ll also discuss some of the applications each one is relevant to.

Our first example is a document, book, or any other text which has sections and sub-sections. The usual way to show the tree structure of the sections is in a document’s outline, or a book’s table of contents:

In this visualisation, a tree is represented with nested lists; each node is a list item, and lists have sub-lists representing the node’s children. The root node is the item at the top of the nested list structure. Parent/child relationships are represented by indentation.﻿(1)

Although some items have the same name (e.g. “Box-and-Pointer Diagrams”), each item is uniquely identified by its numbering (e.g. “3. V. i.”).

Our second example of a tree structure is a file system, which has directories and subdirectories. The usual way to show the structure of a file system is a tree view (or tree menu), which looks a lot like an outline:

The nodes are the directories and files; files are necessarily leaf nodes. Nodes may have the same name, but each node is uniquely identified by its path from the root directory. For example, the path of trees.py is C:\Python\trees.py.

The usual way to show an expression’s tree structure is with brackets; if every expression and sub-expression had brackets, they would look like this:

We don’t normally write all of these brackets in expressions, since they’re implied by the order of operations — * has precedence over +. However, writing all of the brackets shows the tree structure more clearly: each node is represented as a pair of brackets, and its children are nested within those brackets.

Since nested brackets are a textual representation, they’re commonly used when a text format is needed. HTML is a good example: the idea is the same, but instead of ( and ), HTML elements are opened with <foo> and closed with </foo>. You can think of the open-tags as open-brackets, and the close-tags as close-brackets:

With clever spacing, we can show that nested brackets represent the same structures as “outlines”: these really are different ways of thinking about the same thing.

Each node in this structure of nested lists can be uniquely identified by the indices used to access it; for example, outline[1][0][1][2] is "Booleans". This gives us our first tree data structure; notice that this is already valid Python code.

The next visualisation shows tree nodes as areas; areas for child nodes are contained within the area for their parent.﻿(2) Using expression trees as an example again, the nested areas representation looks like this:

We can directly relate this to the “nested brackets” representation, showing that the two approaches can represent exactly the same tree structures:

An icicle diagram (or flame graph) shows each node as an area, but instead of nesting the areas, they’re organised either vertically or horizontally. Here’s an icicle diagram of some domain names and their subdomains:

The nodes are represented by rectangles, and children are adjacent to their parents. This example shows children to the left of their parents, since that makes sense for domain names; so the root node is furthest right.

Icicle diagrams are often used when the size of the area represents something meaningful about the node. For example, the diagram below shows the size of every file in the Linux kernel source, organised by directory:

To see how “nested areas” and icicle diagrams represent the same tree structures, click the button below:

Node/link diagrams are a very common way to visualise trees; if you only know one kind of tree diagram, it’s probably this one.﻿(4) Node/link diagrams explicitly represent the parent/child “links” between nodes, using lines or arrows. This is particularly useful when the nodes and links both have some meaning.

For example, the following diagram shows the fastest rail routes between London and other cities in mainland Britain.﻿(5) The nodes represent cities, and the links represent railway lines: 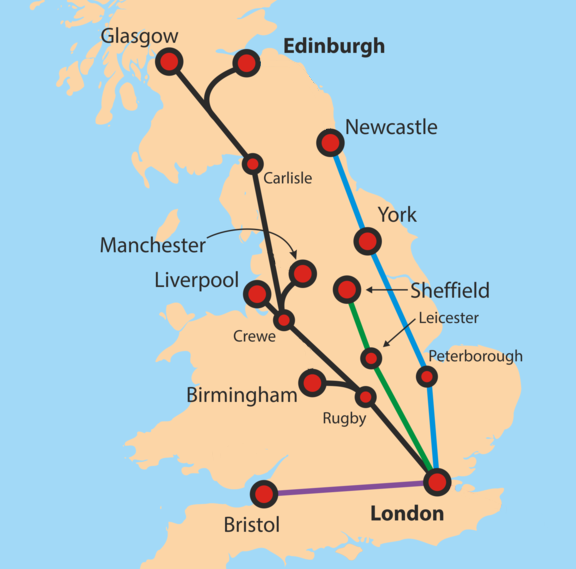 London is the root node.

The next example shows the tree structure of domain names again. Child nodes are to the left of their parents, as that’s what makes sense for domain names: 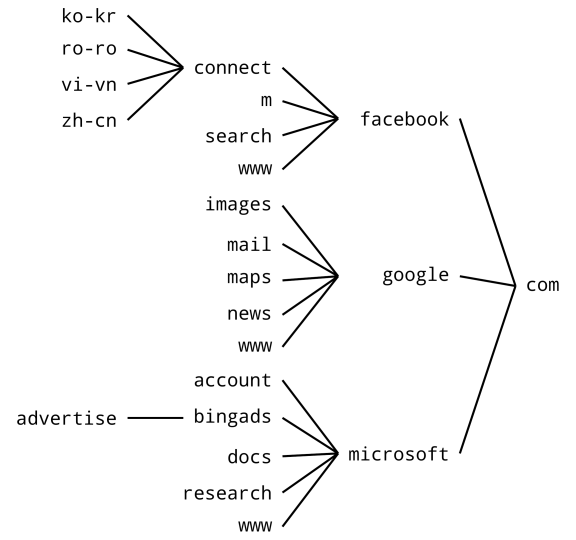 The next example represents the expression tree for 3 + 4*x. The nodes in this diagram shown as circles, with child nodes below their parents; the root node is therefore the one at the top.

Node/link diagrams can show exactly the same tree structures as the other visualisations; click the button to see how they’re equivalent to “icicle diagrams”.

However, we often only use node/link diagrams to solve problems once we’ve already identified that the data has a tree structure. The other visualisations are important because they help us recognise tree structures in the first place.

For example, the table below shows the parent of each node in the rail network example. Since the nodes represent cities, the parent is the next city you’ll go to if you’re travelling to London (the root node):

Hover over the name of a city to find its children in the tree.

This is another textual representation, and it’s hard to visualise the tree structure just using this table. But it is simple and concise, and easy to represent in a computer program — this data can be stored in a dictionary, for example.

We’ve already thought a bit about possible tree data structures, and this is another one; we’ll go into more detail in the next post.