Search problems vary in two ways: what do we want to search for, and what type of collection are we searching in?﻿(1)

To search for something different, we can often just use an existing algorithm with a few small adjustments — consider how easy it is to change the linear search algorithm to search for different things in a list.

Before we get started, let’s specify a search problem: 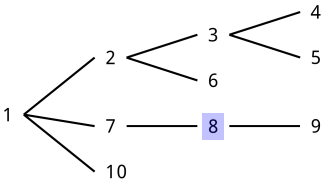 The Python code for the example tree is given below:

In this post we’ll see the simplest algorithm which solves this problem; it can be implemented with or without recursion.

To solve any problem on a tree, the first idea is to use structural recursion. We can design a recursive algorithm by asking two questions: what is the recursive structure, and why would it help to make recursive calls?

A list-of-children tree is a recursive structure because a Node object has a list of children, which are themselves Node objects. If the root node defines the tree, then each child defines a subtree.

If there is a node with the target value, it’s either the root node, or it’s in one of the subtrees. If it’s the root node, we return the node itself; otherwise, if it’s in a subtree, then we can find it with a recursive call.

Here’s the algorithm in Python:

Test it on the example — the correct output of depth_first_search(root, 8) is the node with value 8, which has a single child with value 9.

The first recursive call searches the entire first subtree, so nodes #3, #4, #5 and #6 will all be “visited” before node #7. That is, the algorithm explores the entire depth of one subtree before moving onto the next subtree.

Because a tree is a recursive structure, it was easy to solve this problem recursively. But recursive functions are difficult to imagine step-by-step, which makes them hard to debug.﻿(6)

A recursive function is computed using a stack:

It’s possible to rewrite the depth-first search algorithm without recursion, using our own stack. The purpose of the call stack is to keep track of which calls haven’t finished yet. We won’t be making recursive calls, so there are no frames; instead, our stack will keep track of nodes which haven’t been “visited” yet.

The key idea is that when we see a child node, we push it onto the stack, instead of making a recursive call to search the subtree immediately. The stack contains nodes which need to be “visited”, so when we’re ready to visit another node, we pop the next one from the stack.

This is another form of the depth-first search algorithm — also called iterative depth-first search, to distinguish it from the recursive implementation. Here’s the code in Python, using a list as a stack (with the append and pop methods):