Trees are both; we have an abstract idea of what a tree is, but there are also data structures for them, which we’ll look at in this post. In fact, we can even use tree data structures to implement other ADTs, such as sets or dictionaries.﻿(1)

Actually, our idea of trees is even more abstract than an ADT, because there is no common set of operations which can be performed on all kinds of tree. We might want some or all of the following:

This seems like a lot, but most tree data structures don’t support all of these operations.

Trees can be represented as outlines, which are nested list structures. In Python, we can write lists with square brackets, and nested lists with nested brackets. This gives us a simple data structure for trees, called a list-of-lists.

Step through the animation below to see how a tree (shown here as a node/link diagram) is represented as a list-of-lists: 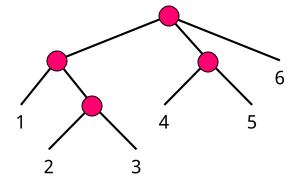 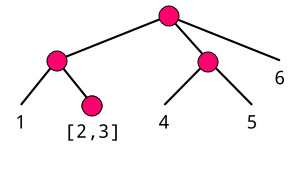 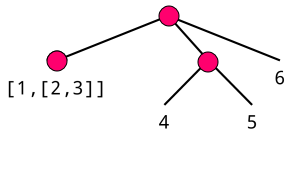 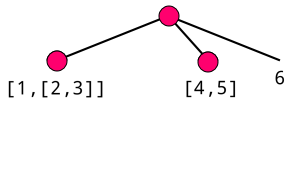 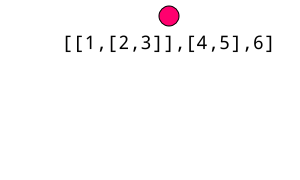 The values in any particular list are that node’s children (or pointers to them). To access a particular node in the tree, we need to ‘get’ from the appropriate index in each nested list.

The list-of-lists data structure is a simple way to represent a tree if only the leaf nodes hold data — then an internal node is its list of children.

Otherwise, if internal nodes should hold data too, then each node has both a data value and a list-of-children.﻿(6) To do this, we define a Node class with fields for a value and a list of children. Here’s the class in Python:

Step through the animation below to see how a tree is represented using Node objects: 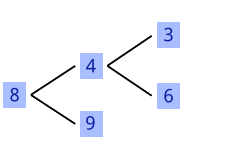 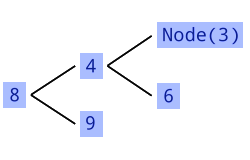 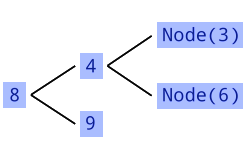 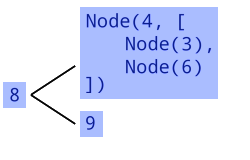 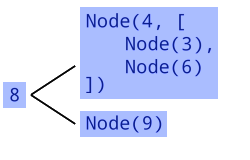 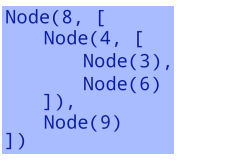 Here’s the box-and-pointer diagram for this data structure — it contains Node objects and lists:

To access a child node, we need to ‘get’ from the appropriate index in children.

The list-of-lists and list-of-children data structures give us easy access to a node’s children, but not its parent. One solution is to give the Node class an additional field for the parent. However, in most applications we don’t need to access both children and parents, so it’s usually only worth storing one or the other. If we store a node’s parent instead of its children, then we have a parent pointer tree.

For example, in the tree structure of “fastest routes to London”, you can find the next city in the route by finding the parent of whichever city you’re currently in.

Here’s a class for a parent-pointer tree node in Python:

Here’s a box-and-pointer diagram for the same tree as above, using the parent pointer tree data structure:

The root node has a null pointer for its parent, because it’s the only node with no parent. Since we can’t access an object unless we have a pointer to it, to use this data structure we’d need a separate collection (e.g. a list or a dictionary) to hold pointers to all of the nodes in the tree.